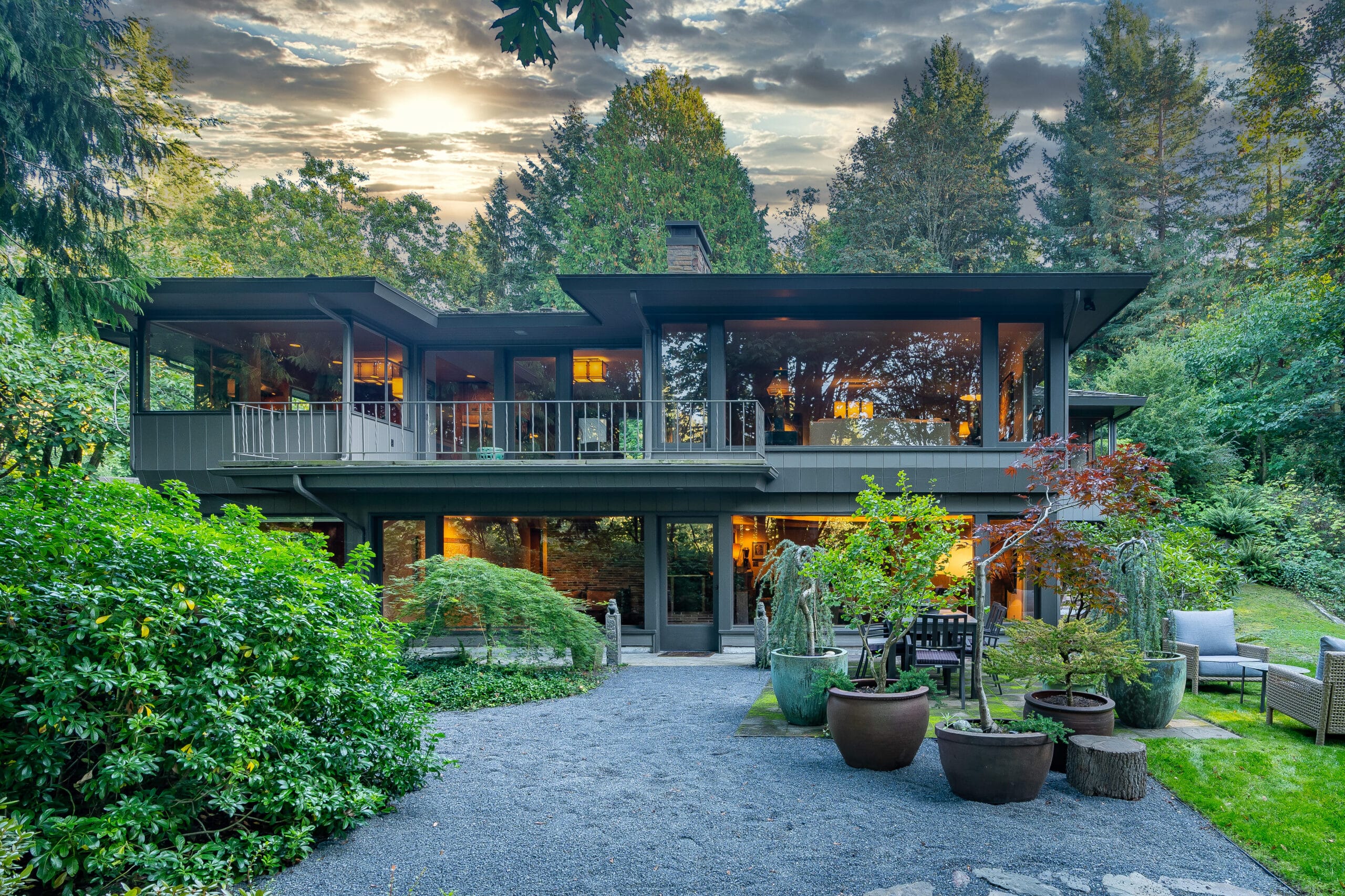 On walks taken through this woodsy neighborhood in north Seattle, Kevin Dodge and Darin Collins kept an eye out for just the right home — a house with character, on a lot big enough to run their Saluki dogs. Intrigued by a glimpse of a Modern-movement house, they walked down the long, winding drive and knocked at the door. The house wasn’t for sale then, but they visited the owner over the next three years, at which point, to the partners’ delight, the owners agreed to sell to them.

A custom-build in 1951, the secluded house nestles in banks of rhododendron and stately cedars with a backdrop of towering Douglas firs. Forest light filters in through floor-to-ceiling glass walls. Stone brings nature indoors in the Modern design. Set on nearly two acres behind a four-acre conservancy, the place has become a perfect retreat for the couple and their dogs.

Still, a significant amount of work had to be done. The house may have a whiff of mid-century Frank Lloyd Wright, but it wasn’t perfect. Rooms on the main floor were boxy and small, connected by multiple doors that obscured light and views. Folding doors further enclosed a small, dim dining room that had been treated to dark paneling, blue shag carpeting, and a much-too-sparkly chandelier. Heavy blue drapery covered floor-to-ceiling windows across the back of the house. In the kitchen, discordant metal cabinets in green, yellow, and orange would have to go.

Selectively removing interior walls, the couple reconfigured the layout so that the former living and dining rooms became an open living and entertaining space. The dining area is now at the west end of the living room. Near the kitchen, four ca. 1950 chairs designed by Edward Wormley for Dunbar create a cool mid-century “Dunbar lounge” for conversation. Laid meticulously into existing wood flooring and stained to match, new oak flooring has replaced areas of worn vinyl and oppressive green slate.

As the couple found it, the entry had been anything but welcoming. Heavy, brown double doors with distorted Coke-bottle sidelights kept out the light and obscured the view. All of this was swapped out for a period-appropriate cedar door with glazing and clear sidelights, with profiles matched to the original interior window trim. A visitor at the front door now sees through the house to the forest behind it.

The kitchen was taken down to the studs and a wall removed, replaced by an island. Streamlined walnut cabinets were hung, the design matched to original built-ins still in the bedrooms. Handsome quartz countertops, a backsplash of 1” square glass tiles, and custom lighting integrate the kitchen into the rest of the Modern interior. A breakfast nook was added beneath a bank of windows on the north end of the kitchen.

The house is furnished with both American mid-century and traditional East Asian pieces. Custom-designed brass chandeliers evocative of Japanese Buddhist temple lanterns hang in the living room, lounge, and kitchen, adding to the serenity.

The master suite’s original walnut cabinets were cleaned and preserved. The room is now furnished with 1970s steel and leather lounge chairs and a Far Eastern chest and artifacts. Grasscloth wall covering, a 1950s staple, covers the walls. The master bath was updated with earth-color subway tile from Ann Sacks, an Indonesian Dutch reclaimed-marble floor, and a walnut sink cabinet that echoes those in the bedroom. The curving glass-block window, original to the house, was simply cleaned

The lower level of the households a family room opening to the rear terrace, along with a guest bedroom and bath. Original checkerboard linoleum was conserved, as was the unusual, custom, overhead “wave” light, its neon tubes intact and functioning after nearly
seven decades.

A mix of ’50s Modern furniture and Far Eastern textiles and antiques, collected on trips, fill the rooms: Mongolian and Tibetan side tables, Japanese tansus filled with richly colored fabrics, porcelain from Hoi An in Vietnam, a weaving purchased in Malaysian Borneo.

This website uses cookies so that we can provide you with the best user experience possible. Cookie information is stored in your browser and performs functions such as recognising you when you return to our website and helping our team to understand which sections of the website you find most interesting and useful.

Strictly Necessary Cookie should be enabled at all times so that we can save your preferences for cookie settings.

If you disable this cookie, we will not be able to save your preferences. This means that every time you visit this website you will need to enable or disable cookies again.